Strathearn House was built in the 1864, on eighteen acres of land at Belmont, by William Mullan. In 1904, the house and land was sold to Mr Alexander Taylor, Managing Director of Belfast Flax and Jute Co Ltd.

For a more detailed history of the school please click on the Strathearn Timeline link below. This will provide a visual representation of key dates and information displayed in chronological order.

In 1929 the house, with its tennis courts (near the site of the present Sixth Form Centre), conservatory, porters’ lodges and larg 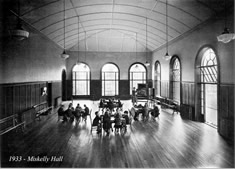 e pond (on which the present canteen stands) was sold to Victoria College. The College had expanded rapidly in Belfast, and Strathearn was bought as a junior school for the Belmont and Knock areas. Pupils of all ages came from lots of little private schools round about, to the new school.

Strathearn School opened in 1929 with sixty three pupils. Miss Miskelly, a classics teacher at Victoria College, was appointed the first Headmistress. Boys and girls entered at age four and the boys stayed until they were eight, when most of them entered Cabin Hill. Girls could stay on until they were fourteen, and sat the Junior Certificate. They could then move on to Victoria College.

As early as 1931, one hundred pupils were in the school when the conservatory was knocked down, and an assembly hall, with Vita-Glass windows was built. This hall served as a classroom for the kindergarten in the mornings, and in later years was partitioned by a green curtain. The only teaching aid was a freestanding blackboard, which lived on the Miskelly Hall stage for at   least another fifty years. The hall is now a Sixth Form study room.

hat! In summertime a white blouse and grey tunic was worn with a white Panama hat with a red band.

There were no school meals, and while the infant classes went home at 12.45 pm, the pupils over eight years old had to be back by 2 pm. Most children walked, but some could use the Stormont Civil Servants’ bus as very few parents had cars. Others had to negotiate the Knock Road railway crossing, running up and over the footbridge if the gates were down, sometimes pushing a bike!

During the Second World War, Miss Taylor’s fruit garden was turned into a vegetable allotment, where pupils ’Dug for Victory’. Air raid shelters were constructed at the back, and then used as bicycle sheds until 1994 and is now the Sixth Form Centre corridor. The school was briefly evacuated to The Argory, near Dungannon, and then to Portballintrae with Victoria College.

In 1944, Miss Miskelly retired and Miss Adelaide Rodden became Headmistress, developing an extensive building plan to house the growing school. This is now called Rodden House. Classics were taught but there were still no Science subjects! Miss Rodden introduced the House System, naming each house after four of the governors - Barbour, Boucher, McCaughey and Watts, and each of these governors provided a house trophy.

In 1950 a separate Strathearn Committee was established. The Victoria College uniform was replaced by a green tunic, fawn socks and shirt with a wine stripe in the tie and scarf to remember the founding school. Additional space for the Preparatory Department was urgently required so that the secondary department could keep girls on after Junior Certificate. Following a fire in Mr Thompson’s home at 157, Belmont Church Road, Penrhyn House came on the market in February 1952. The governors bought it for £3,000 and the already thriving Preparatory Department moved in, to become what we now know as `Penrhyn ’.

In 1956 Miss Eileen Hamilton became Headmistress. During her time science labs were built and a new dining hall was completed but had to be extended in 1964 to accommodate the two ‘sittings.’ Then came the Sixth Form Centre, music rooms and a multipurpose hall.

In 1978 Miss Hamilton retired and a former pupil, Miss Audrey Lamb, became Headmistress. Strathearn was now a successful school with a growing reputation for academic success. A Secondary department of 469 pupils in 1980 grew to 759 by 1997. This continued growth was catered for by the addition of further accommodation. In mid 1980s the wing housing the Careers and Art departments was added. Then in 1992 the Sportshall was built with room for 5 badminton courts and in 1995 the Technology block, incorporating ICT, and bringing the school’s accommodation right up-to-date. In 1987, the house beside Penrhyn at 105 Sydenham Avenue was purchased and allowed further expansion of the Preparatory Department which had now 212 pupils. In 1988, the control of the school by the founding Victoria College was relinquished and Strathearn School Belfast was established with its own Board of Governors.

In 1997, following the retirement of Miss Lamb, Mr David Manning was appointed Principal. In December 2014 the school completed a major rebuild on the same site, retaining only the Sportshall and Technology Department. The School looks forward to continuing success as one of the top schools in Northern Ireland.