Strathearn School Students Debate in the House of Lords 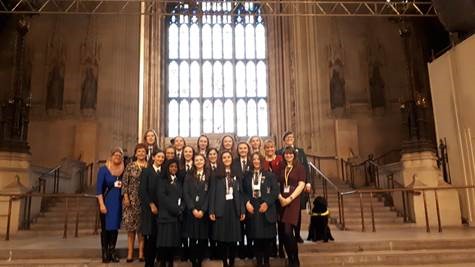 Pupils from Strathearn travelled to Westminster to participate in a debate in the Lords Chamber at the Palace of Westminster run by Plan International UK and the English Speaking Union. Four pupils from the east Belfast school were pre-selected to add their voices to the debate, called Girls Breaking Barriers, on 16 November, which focused on what can be done to help girls to achieve their potential.

Mrs Connery, Principal of the Belmont Road school said, ‘Hearing the voices of girls from Strathearn speaking at the Chamber Debate at the House of Lords was wonderful. The pupils’ measured contributions added much to the discussions.’ She continued, ‘The opportunity to travel to London to participate in the Girls Breaking Barriers debate and to put questions to inspirational women in a House of Lords Committee Room will not soon be forgotten.’

The debate was opened by Ellie Massey, who discussed the damage that persistent stereotypes can cause girls as they pursue their education. Darcey Jamison, Rachel Lipson and Hannah McCartney delivered prepared speeches, and a number of the school’s students were called upon by the Deputy Speakers to add to the debate, and gave impromptu speeches to the Chamber.

Barnaby Smith, Plan International UK’s Youth Engagement Officer, explained that Plan International’s ‘research has found that girls still face discrimination tied to their gender.’ He added, ‘This debate marks a significant step towards tackling the many barriers to success that girls experience from a young age. It has been an absolute joy to work with students from Strathearn School – they have been an inspirational group to work with, have been confident in sharing their experiences, and I really hope to cross paths with the school again in the future.’

Well done to the pupils who represented the school so well at the event.

By using this website, you agree to our use of cookies. Click here for further information.
We use www.surveymethods.com for our online survey projects. SurveyMethods.com Online Survey Software is a comprehensive survey creation, deployment, and analysis tool. Visit, www.surveymethods.com, to obtain more information for your educational institution or and non-profit organization.